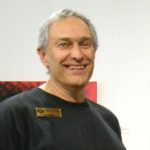 Longtime SCC staff member Leslie Potter has retired! Les has decades of experience as a practicing artist, teacher, curator, preparator and vital member of the artistic community of Saskatchewan AND of course, as an SCC staff member.

As a way of celebrating his remaining time with us, the Saskatchewan Craft Council has been running Ask Les, an advice column about anything and everything! Here is the last issue of that column:

What was it like to have an office in the basement of the SCC building, surrounded by smokers?

I think there were only a couple of smokers, and at that time I also smoked a bit, although I refrained, for the most part, from smoking in the building. The weirdest thing was having the office in the packing room, electrical room, etc. But you know, that is how the SCC was able to survive and continue through until today.

How many Executive Directors have you worked with? How many exhibition job shares have you had?

Tell us a good story here. What’s the most challenging show you’ve put up in the SCC Gallery?

Most challenging show and a good story? Uhm…… OK, it would probably be the time we featured works that were submitted, but not selected for “Dimensions”. We wanted to explore the jurying process, because that is how works are selected for exhibitions like “Dimensions”. The challenges were many, but I believe the benefits were even greater. We had a panel of previous Dimensions jurors with a question and answer period and at a later date, a round-table discussion on the whole process, including the exhibition, “The Jury’s Out”. This was a challenging proposal to put out to the entrants because, in essence, you are saying to them that we want to show your work even though it was not good enough for the “real show”. I think it helped folks understand that jurying is not an absolute, but it is the best system we have. And, of course it was a challenging show to hang because there were so many works, probably over 130, if I recall correctly.