The Saskatchewan Craft Council Board of Directors is responsible for the overall governance of the SCC. It establishes policies and ensures that they are adhered to.

Board members serve a three-year term and they are chosen on a rotational basis at the SCC‘s Annual General Meeting held each spring. 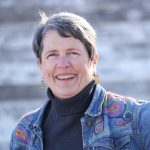 I am interested in serving on the Craft Council Board because it is at a pivotal time in its history; between the generation that founded it and the new generations of craftspeople looking to it for support and leadership. I am impressed with its progress and outreach and would like to offer my board experience to an organization that is growing and changing. 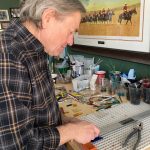 Eric‘s CV as an artist is much shorter than his 40+ years as a Saskatchewan lawyer. His experience also includes 16 years service as a member of the Legislative Assembly Including 12 years as a cabinet minister responsible for such a portfolios as Health, Finance, Industry, and Justice. As well, he served as an executive in the mining sector for 12 years. Although he had never contemplated pursuing art as a vocation, after leaving full-time paid work, a friend encouraged him to try working with glass. He developed a strong interest in that medium and a desire to become a professional artist.

Eric now works as an artist, a part-time lawyer, and as an Arbitrator.
As a fused glass artist, Eric is a Juried Member of the Council, and a member of the Saskatoon Glassworkers Guild. He presently sells his work directly, at the Council Boutique, and through Handmade House in Saskatoon. He has participated in Art Now, Glass Art 19, and 21, and looks forward to more opportunities to present his work.
Having served on various industry, community and charitable boards, Eric contributes experience in governance, strategic planning, legal matters, and other areas to the SCC board. 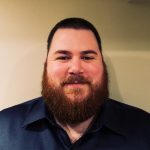 I was born in Swift Current, where I grew up with my younger brother and older sister. After high school I spent seven years moving between jobs as a service technician for telecommunications companies, where I developed skills such as communication, conflict resolution, troubleshooting, and managing workloads. At that time I decided that while I enjoyed the work I was doing, it was not going to be able to provide for the lifestyle I wanted and I felt a more intellectually challenging career would suit me well. After attending the University of Saskatchewan for four years, I graduated with a Bachelor of Commerce degree with a major in Finance. Ultimately I was convinced by my father and brother, also accountants, to join the family profession and so last year I moved back to my hometown to work at Stark and Marsh CPA LLP.

I have always appreciated fine craftsmanship and the effort and love that goes into creating something from raw materials. I do not have a craft of my own, but I have done many DIY and construction projects and am familiar with the satisfaction that comes from achieving one’s desired result and the pride of having your work admired. I feel that promoting craft in Saskatchewan and beyond is a worthwhile endeavor because it connects us with the past, our communities, and our sense of worth.

I am pleased to serve on the board of directors for the Saskatchewan Craft Council and assist in achieving its mission. Lori Steward brings a diverse skill set the Board of Directors of the Saskatchewan Craft Council which includes a technical, scientific background; she holds a Bachelor of Science in Mathematics and Computer Sciences from the University of Québec. In addition to her extensive work in the settlement sector helping newcomers to Canada achieve full and successful lives, she has worked as a programmer analyst and graphic designer. She is currently the Community Connections Manager of the Global Gathering Place.

Lori has an interest in fine craft and is looking forward to a future in which she has more time to pursue this avid interest. In the meantime, she is hoping that her work with the SCC will dovetail with her interest in settlement by empowering newcomer makers to pursue fine craft in Saskatchewan.

Ms. Steward lives in Saskatoon with her husband and two daughters. David has been a Village councilor in Tugaske for one term. David has also sat on the Vocational Schools  Advisory committee  to the ministry of Advanced Education & Immigration. David served on the SCC Board from 2001 to 2003 and 2014 to 2017. He is currently in a second term. He is also the Saskatchewan Representative for the Canadian Crafts Federation.

Terri Ekvall is a ceramic artist based out of Regina, Saskatchewan. She loves the way clay feels in her hands as well as her ability to express herself with it. She makes both functional and sculptural objects. Her inspiration comes from life, gardening and the colours of Saskatchewan sunsets. She finds that beauty and simplicity are a common thread of her work.

Brenda Wolf is a multi-media artist living in Regina, Saskatchewan. In 2008, she fell in love with clay after visiting the University of Regina Ceramics studio. Taking basic pottery classes in both wheel throwing and hand building, she eventually set up a small studio in her home. Brenda’s first works were contemporary functional ware. With these pieces she experimented in various surface design methods, underglazes and clay mediums. A self-proclaimed “messy thrower,” Brenda particularly loved the tactile characteristics of clay which allowed for unique hand built pieces, namely her “Jarheads.”

Brenda began working in paper, specifically European florist crepe paper, after her daughter requested paper flowers for her wedding in 2013. After much research and experimentation, she’s created her own techniques and continues to push the limits shaping crepe into realistic pistils, petals, buds, and leaves.

Her latest work cleverly combines clay fruits and vegetables with crepe paper stems, leaves and floral blossoms. The “produce” is made by pinching little pots to form fruits and vegetable shapes to be further textured and sculpted by hand. She’s continuously developing surface colouring techniques to add depth and life to her pieces. Brenda’s inspiration for these pieces come from her bountiful vegetable garden on the farm and fond memories in gardens of her parents and Grandmother. Accepted into the CARFAC mentorship program in 2012, Brenda worked under the tutorship of her mentor Monica DeCampo. That same year she was invited to WinterGreen Fine Craft Market as an Emerging Artist. Brenda has participated in a number of workshops with renowned ceramic artists; porcelain with Antoinette Badenhorst and Japanese inlaid clay (Mishima) with Diana Fayt. She’s had opportunity to attend workshops with local artists including Carole Epp, Monica DeCampo, Jeffrey Taylor, and Sarah Pike. In 2015, Brenda exhibited her show “Woodland” at Traditions Hand Craft Gallery. 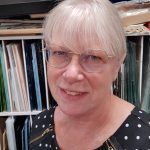 It has been a new experience for me to be part of the SCC Board. My years of involvement in the arts as a supplier and Educator in the field of glass of Glass Art has provided with the relevant experience to hopefully make a meaningful contribution to the arts and crafts community.  My personal glass art can be found in churches, bars, restaurants, and private homes across Canada.  I am keen to assist the Craft Council in the support and development of the art community in Saskatchewan. 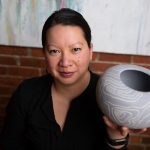 Janet Ng is a potter and a Professional Craftperson member of the SCC. Being fortunate to spend a lot of time outdoors and looking at maps, Janet’s pottery is inspired by landscapes, running water, and big skies. Her work is mostly functional and translates landscapes into ceramics for every day life.

Janet Ng has a Ph.D. in science and works in wildlife biology. She has experience working in the non-profit sector, as well as volunteering on local and national boards. 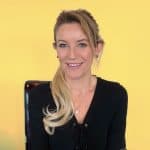 Lee Halford loves design, fashion, and working with her hands. She was taught to sew and knit when she was young, but lost interest in her crafts when she moved away from home. Later, though, when looking for a new creative outlet, Lee thought about making apparel again. She began designing winter accessories for herself, then for friends. Her designs drew attention. In 2011, Lee began Stepcat Apparel and started selling her work online. Retail outlets approached Lee and her work has now been sold in stores in Regina, Saskatoon, Winnipeg, Hamilton, Nelson, and Colorado.

Her goal has always been to design apparel that has eye catching design, but is also comfortable and durable.